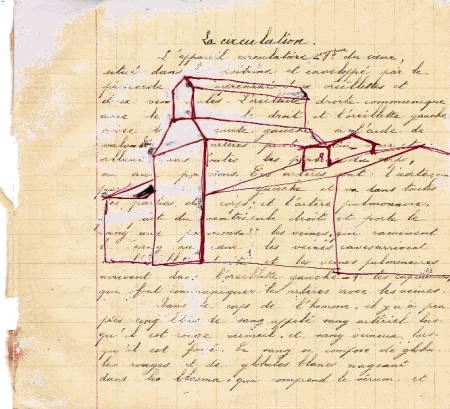 Although they could bear no resemblance to caravans  all the houses have wheels. This is simply an added bonus which allows people to change the location of their  dwelling place depending on the direction of the sun, family rows, arguments with neighbours – stormy conditions in general or quite simply a change in mood.

Thus, if they want, or if necessity dictates, Petaouchnockiens can travel with their houses. Depending on the owner the architecture can be colourful,  playful,  imaginative or conventional. The houses are often built of wood and painted in colours made from natural dyes – the same ones which are used to dye fabrics (see section: The People). Stone-built house, however, are also found as are houses constructed from “beet-beet” – a sort of brick made from beetroot which has been left to dry in the sun over a long period and made water-proof with egg white.

Needless to say this latter type of traditional housing is very labour-intensive and much sought after – hence the traditional saying “come selten  et cara-cari  qual una huis de rogische beet” – roughly translated as “as dear and rare as a beetroot house”.

As well as having a very treasured place in the heart of the Petaouchnockiens, and being aesthetically very pleasing, the  other amazing  aspect of such a house is that, although red it is very green:  it is incredibly energy-efficient – preserving and maintaining the heat in winter yet it remains cool in summer. The upkeep of such a house has only one stipulation: there must always be an ice-cube with a pea in the freezer.

As Petaouchockiens  are  instinctively  poetic they often like to write or even carve their favourite proverb or poem on the facade of the house – this can sometimes extend to the interior. Linguists, poets, carvers and collectors of proverbs and sayings undertake – at least once in their lives – a sort of pilgrimage where they do a tour of the country visiting such houses. So much so that the expression, “fare cercluish de huise  pintari” – to go on a tour to visit the painted houses”  has come to mean  “to go on an amazing trip with unknown consequences”.

If you are interested  in buying or renting a property in Petaouchnock you will soon be able to visit the Petaouchnock property page or contact directly Magi Mixwordsmith, the general secretary in charge of current affairs of Pétaouchnock through the contact page of this site.