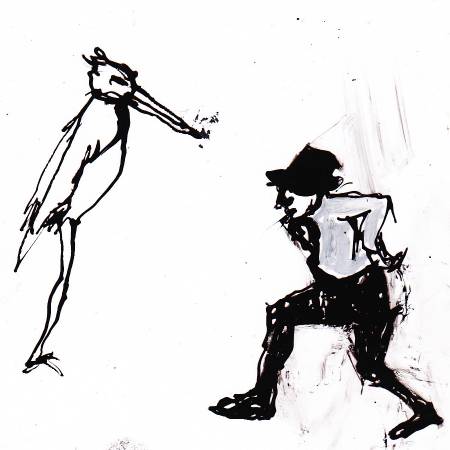 Most people adhere to Chnokism which is not a monotheistic religion - in many ways it may seem pantheistic or animist – with people focusing on something from the natural world – this may be an animate object, often a bird, a very popular choice being the heron – or sometimes a rook or even an eagle – for a silent meditation.

The distinctive silhouette of the heron can be found in many works of art throughout the country. Alternatively, a tree, very often the silver birch, is used. Otherwise inanimate objects such as stones are often the focus of this meditative practice when the stone becomes the focus of the practice this is called ‘Petrism’, a branch of Chnokism (one of the meanings of Petra meaning stone in the Petaouchnockois language).

The practitioner focuses her attention on the object and the meditative process takes place in silence and this of course is very similar to meditation practices in Eastern cultures.

Another important aspect of chnokism is that of holding meetings or gatherings in the open air where everyone has a voice and is heard – very similar to Quaker meetings.

Pacifism, needless to say, is an intrinsic part of chnokism and most importantly it is not an evangelical religion - interestingly the word zealot does not exist in the language.

Another important part of the Pétaouchnockiens psyche - and very close to my own heart - is the presence of the goddess figure Hypatia. Hypatia was the only known Greek female philosopher and mathematician who lived in Egypt. She was brutally murdered and although a pagan martyr she has nevertheless became respected by a great many Christians and throughout history there have been many literary, artistic and philosophical references to her (Proust and Umberto Eco amongst others). She was also a figurehead for an American feminist movement in the 1980’s and there is even an asteroid and an adobe typeface named after her! Her name means” highest” or “most supreme” and this is indeed her image in Petaouchnock where she is a very revered figure who appears on coins. Hypatia has also entered Petaouchnockois language and means intelligent, witty and creative.