The Kitchen is on Fire 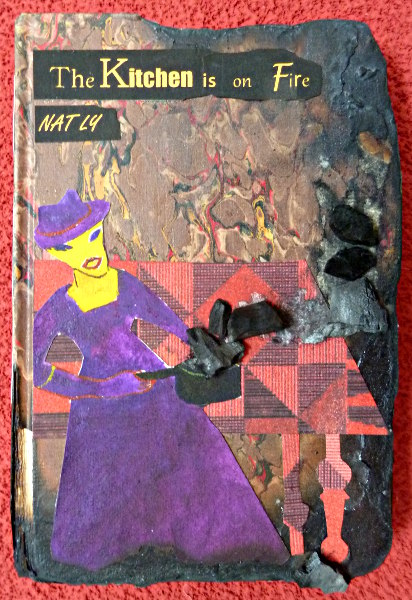 Flora is a young librarian, newly settled in the village of Petersnock.

One morning on her way to work she spots a notice in the Chinese Restaurant window which had been recently half destroyed by fire saying: “Due to the kitchen was on fire the restaurant will be closed till further notice”.

First, she doesn’t think anything of it but then she notices that weeks later the inside of the restaurant still looks the same as it was on the day of the fire with the tables fully set, half empty glasses, spring rolls still on the plates and hastily thrown away crumpled napkins, “like a place frozen in time” she thinks. Eventually when she begins to read the newspaper headlines saying that some people from the village had disappeared that very night, she set about the task of trying to find out what had happened and why some strange noises could be heard under the main road of the village.

This book is a cookery book in disguise; it is part of the series called “the reader-learner”. This collection aims to give the reader information about a topic- gardening, craft, painting method, car maintenance or, as in this case, cooking, through a novel. That is why it is also such a gripping book, a page-turner which is difficult to put down because you are discovering fascinating facts about traditional Chinese cookery that you would like to experiment as soon as possible AND at the same time you just want to know the end of the story!!