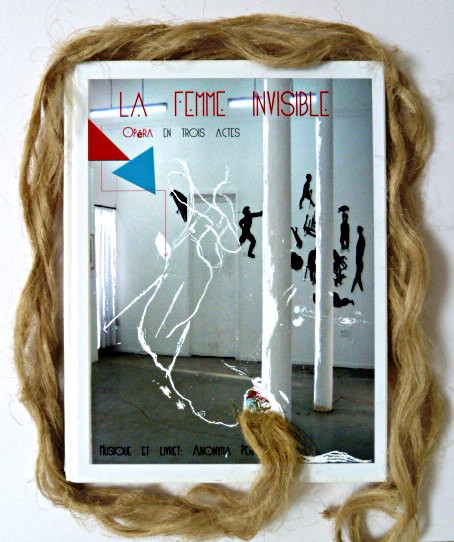 The name Anonyma Perla hides a collective of rebellious young women who seek to turn the musical landscape of Petaouchnock upside down.

The opening of the « Invisible Woman » on the 19th November caused a scandal mainly amongst “The Society for the prevention of cruelty to tortoises” which were outraged when these animals were used on stage but also amongst “The Society of friends of Psychiatrists”. There has been no comment from "The Society of Tinnitus sufferers" yet. In spite of its critics this opera is bound to leave its mark on the music of Petaouchnock.

First act: A young woman in a room is waiting for the right moment to comb her hair ; the music is dodecaphonic, and the character is alone, preparing herself for this trivial gesture. The music is very dramatic and the tension keeps mounting until the moment she is about to comb her hair.

At this climatic moment, which happens only at the end of this act, a white curtain falls on the stage, leaving only a small square window in the middle. Some men are walking past the window and commenting on what they can see through it; a woman who remains hidden to the audience. The men are psychiatrists.

Second Act: A tortoise farm run by a mad savant; the tortoises are singing and as we listen to them we become aware that the savant has discovered that when a tortoise is starved to death its skin becomes exceptionally thin but strong. These tortoises are the victims of a morbid technique.
NB: after the second act, whilst the audience is leaving for the interval, the producers stipulate that music, unexpectedly in the style of Mahler, should suddenly start up, and the invisible woman should sing in an explosion of colours (in the style of the end of Space Odyssey 2001).

Third Act: The young woman becomes invisible; she is a model and against a backdrop of electronic music the third act features a fashion parade where the models are so thin that they become invisible and their clothes walk down the catwalk on their own, suspended in thin air.

A great opera which will certainly leave its mark on the history of music.